Voices from the WSF: For the right to dream!

Among the issues discussed, were the main challenges that the Society of Jesus has to face such as globalization, peace and reconciliation, native cultures or the environment and human rights. According to Frei Betto it was an encounter with the challenge to "integrate ecology in the purpose of the only fight which is valid: the fight that goes against everything that threatens the life of the poor...".

The conclusions of this previous encounter were presented to the WSF by Fr. Betto himself. "In the beginning only a few people went to listen to him but gradually these people became hundreds. A stream of people followed Frei Betto outside the pavilion reserved for his presentation where he addressed more than 1.600 that had gathered there. It was a very moving moment as was the meeting of the native leaders with the various authorities" Lucia Rodriguez tells us. What was supposed to be the speech of the authorities to the natives, suddenly changed as they decided to raise their voices to express their demands. It was a clear demonstration that the social movements have something to say. 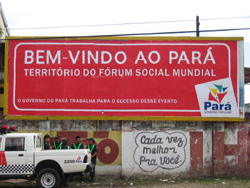 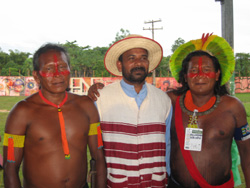 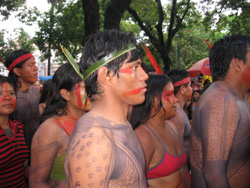 The Belem World Social Forum will be remembered by those who attended as a world encounter of social participation and time shared among the less favoured groups; groups of Dalits and other tribes from India and native Amazonians who for example discovered that in spite of geographical and cultural differences they shared common experiences: environment destruction, the daily fight for life...

According to Francois Houtart, member of the International Council of the World Social Forum, "in this Forum we have seen the need to advance in a collective thinking process and analysis, to add new generations that will assume responsibilities in the Forum with ease and knowledge, to build new working nets and to revalue political action as a necessary tool for alternative transforming action."

"Only a few days ago, the world to me was Tamil Nadu, in India. Now my horizons have expanded. When I get back home I want to tell my family and my friends that we are not alone, there are plenty of people to help and fight for us and with us. Another lesson learnt these days is that we can pressure our governments not only from Tamil Nadu but also at international level.

(Rani Sivan lives with her husband and her three children on a road side. Rani belongs to SAPI, South Asian People's Initiatives, promoted by the Society of Jesus and made up of the movements of the most deprived communities in India and East Asia.)

"Sharing the caminhada (march) of the WSF was a wonderful experience. To see such different people, from different continents, different colours. To see the human race wake up to walk together to defend the poor. I have seen different groups and organizations listening to the social injustices we are living today and asking responsibility to the people in order to act and fight the world's injustices"

( Andre Agbogan, from Togo, works in South Sudan as country director for the Jesuit Refugee Service.)

"I trust that the presence of the native Amazonians in the WSF will help to understand that the native populations have a word to say to the world on how to take care of the mother land".
(Arizete Miranda Dinelly is a native woman working in the Amazonian Itinerant Team)

"It has been made very clear these days that, once again, we have to come out of the comfortable zones, "come down" to where the people whom we work with are, in order to come out together and go to the borders to be with the people no one wants to work with".

"The Pre Forum has offered us a great opportunity to weave networks with people with whom we share the same mentality although we may come from varied organizations. We have a great potential to become a powerful advocacy. It has been a very good opportunity to share good practices and lessons learnt by each other.

I have also learnt that the problems faced by the Amazonian natives are not specifically theirs or of other native populations in the world. They are problems experienced also by refugee and displaced people with whom I work in my region."