Alistair works hand in hand with our main field partner: the Jesuit Refugee Service, JRS, that has been working in Southern Sudan for over ten years, promoting education and peace culture. In the areas where they work, the states of East Ecuatoria and Central Ecuatoria, there have been no incidents, which is due partly to raising awareness work on the Comprehensive Peace Agreement, CPA, reached in the country in 2005. “Local people who attended the workshops are now aware of their rights and responsibilities. They also learnt who to vote in the referendum, because the vast majority of the country voted for the first time in their lives in the elections of April 2010" explains our colleague.

After two civil wars between the North and the South which meant uninterrupted violence between 1955 and 2005 with only eleven years of truce, with almost two million dead and over four million refugees in their countries or displaced from their homes in Sudan, the promotion of a peace process and awareness raising is most necessary to avoid new conflicts. As Alistair tells us, the Southern Sudanese are living a "unique opportunity" to rewrite their history. If the result of the referendum which will be known by February is positive, which seems most probable, the African borders inherited from colonial times will change.

“People were very eager to vote, to express their opinion after such a long time suffering war and conflict. The Southern Sudanese started queuing up on the night of Saturday, January 8, a day before the referendum, even though they knew they had a whole week to vote. And they did so, because they are aware that now, after so many years of war, they have a unique opportunity to reach their dream: to have a country of their own. They cried with happiness, they danced, prayed and sang while they queued up" says our project staff member. 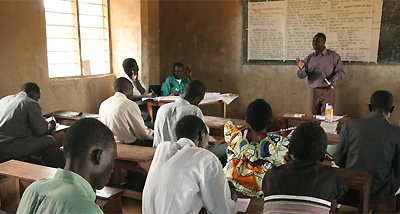 "People are convinced that their lives will change" he says. "For many years, the inhabitants of the South have felt as second rate citizens or even third rate, due to the ill treatment from the Khartoum government. Now they are very happy at the possibility of being able to see the birth of a new state and ready to work for a better life".

In spite of this hopeful climate, there is still a long way to go to see the independence of Southern Sudan. There are still great challenges such as the current conflicts between the miseriya (North) and the dinka (South) in the Abyei region, the negotiations of new borders or the management of oil and other minerals which are mainly located in the South. "This will continue to be a source of tension between both sides and we have to give the Sudanese a vote of confidence, both to those of the South as to those of the North, whom we hope will respect the referendum results" according to Alistair.

Our work: education for refugees and returned people

The communities where Alistair and the JRS work " are also very much aware that there is a lot to do and that they are starting almost from scratch ( it is one of the world´s poorest countries), but they are very motivated" he says. So much so, that over the past few months there has been a massive displacement of Southern inhabitants who up to now had sought refuge elsewhere, who wanted to return to vote and be part of this moment. 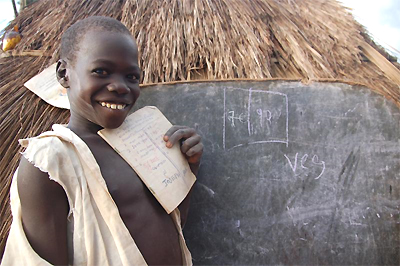 Our JRS partners have accompanied these people as refugees in Ethiopia, Kenya and Uganda, also the displaced in Southern Sudan since 1997 (Nimule since 1997 and Lobone since 2001), and now in a more intense way after the 2005 peace agreement. Working with the Sudanese refugees in Uganda and Kenya, the JRS saw the need to prepare people for the possible peace and the reconstruction of Southern Sudan and has started training a high amount of teachers. At present, the biggest JRS projects are in Southern Sudan with over 51.000 beneficiaries.

Alistair points out the "increasing numbers" of schools where the JRS works at the border with Uganda, through an Agreement with the Spanish Agency for International Cooperation. In two years they have increased from 27 to 48. Because quality education is key for the success of this peace process.