"We, the democratically elected representatives of the people, based on the will of the people of South Sudan and as confirmed by the referendum on self-determination, hereby declare South Sudan to be an independent and sovereign state," said Igga before Sudan's flag was lowered, the South Sudan flag was raised and the new anthem sung. President Salva Kiir Mayardit took the oath of office. 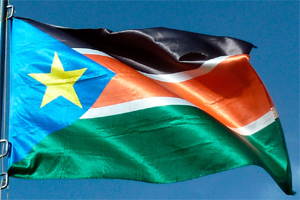 South Sudan's flag which was raised at the independence ceremony in the capital Juba on 9 July 2011.
(Johannes Siebner SJ/JRS)

"This is a day that will forever be engraved in our hearts," Kiir said in his speech, stressing his determination not to go back to war. "We will live at peace with our neighbours in the north, east, west and south. ... Having been at the receiving end of injustices for the better part of our post-colonial history, the people of South Sudan will never accept to be aggressors," he said.

For decades, South Sudan was home to a conflict that, with four million displaced and two million dead claimed the highest number of civilian casualties since the Second World War.

For many South Sudanese, this was the happiest day in their lives. Given that the war first began in 1956 and ended in 2005 with only eleven years of peace in between, almost everyone has a memory of the bitter price of conflict.

"I am happy to see the birth of the new nation and I hope the independence will bring job opportunities and new investors to our country", said 22-year-old Charles from Nimule.

The break-up of the continent's largest country marks a milestone in African history; some experts consider it the biggest event since the fall of the Apartheid regime in South Africa.

While north Sudan's President Omar-al-Bashir expressed regret over the fact that the 2005 Comprehensive Peace Agreement had not resulted in unity, his government was the first to recognise the new Republic of South Sudan on Friday, hours before the split took place.

While the South's independence is a sign of hope, marking the end of one of the most devastating conflicts, some key issues still need to be resolved and huge challenges are lying ahead.

Oil-revenue sharing, border demarcation, questions of citizenship and the status of the border regions of Abyei and South Kordofan where northern government forces carried out attacks during the past weeks, displacing hundreds of thousand of civilians, are likely to remain contentious issues for the coming months.

The South in particular must overcome weak state capacity, chronic insecurity and manage post-conflict transition. The ruling party has to lay foundations for a more inclusive multi-party landscape and work towards unity among the more than 200 southern ethnic groups.

Ranked among the last 15 countries of the UN's Human Development Index, the South also has a long way to go in terms of development. "In ten years we want to see the economy, education, health care and security improved", said Charles, expressing a hope shared by many in the new nation. "The president should give priority to developing infrastructure and promote the private sector", he urged.

"People should now overcome their excitement, take responsibility and be accountable for the independence they have attained", said youth representative, Louga Keji, in Nimule, where more than 30,000 people had gathered to celebrate the South's independence.

JRS in many ways shares the hopes of the South Sudanese, having accompanied them through projects providing education, peace building and pastoral care in Uganda and South Sudan for 20 years.

In an email, JRS Eastern Africa's Regional Director, Frido Pflueger SJ, congratulated staff in South Sudan, expressing his hope that the country may overcome poverty and become a place where people can live in peace.

"You have been fighting for so many years for this day to come. May your country be a place where all people can live in dignity and mutual respect and may you have dedicated leaders led by love for their people," Fr. Pflueger said in his email.

In Nimule, JRS provides educational support to 15,000 students and peace and civic education to around 75,000 people. JRS will continue to work in South Sudan until 2012.