During her visit to Spain, Sonia Adames,  director of the Jesuit Refugee and Migrant Service for Santo Domingo (JRMS) has reported on the work carried out by Entreculturas with its two strategic partners, Fe y Alegría and the JRMS in Haiti, after the earthquake on January 12. “Haiti is worse. The situation of 2 million displaced is very hard. It is not the same to die as to die slowly" explained  Adames.

In her tour of several Spanish cities (Santiago de Compostela, Malaga, Logroño, Santander, Valladolid and León), Sonia Adames has given a conference  “Haiti. The earth moves, the people move" in which she stressed the idea of "having to re invent Haiti, not reconstruct Haiti" while pointing out the importance of leadership training:" It is necessary to create a social base, accompany the camps for displaced people, decentralize Puerto Principe and give voice and power to the provinces". In face of the next elections in November, Adames has been cautious at the difficulty to guarantee transparent elections in the current emergency and crisis context. In spite of all these considerations, Adames is confident that "Haiti will rise from ashes".

You may also see the interview in video.

The  unsustainable situation of the refugee camps

Several groups of displaced people are demanding in Puerto Principe the right to a dignified and secure home in view of the constant hurricanes of the season and as a reaction to the violent expulsions by the landowners where they have settled since January 12, 2010. The protests have increased considerably over the past months.

More than 8 months after the earthquake that devastated Haiti´s capital and its surroundings, 1.3 million displaced people are still living in camps on private lands and public places, while other survivors find themselves in the street. In face of the indifference of the Haitian government, which has taken no measures to solve conflicts related to landowning and relocate the displaced, several land owners have carried out violent expulsions that are "illegal" because they have no legal authorization, among other reasons. The various promises of relocation that the Haitian government is announcing together with some international organizations, are taking too long for the displaced.

The Jesuit Refugee Service  (JRS), who accompanies various camps for the displaced after the earthquake, continues to ask Haitian authorities and the different international agencies to carry out fast and articulated actions with the displaced people´s committees and other local agents to answer more efficiently to the needs of the displaced population and thus protect  their fundamental rights such as the right to a secure house and with dignity. 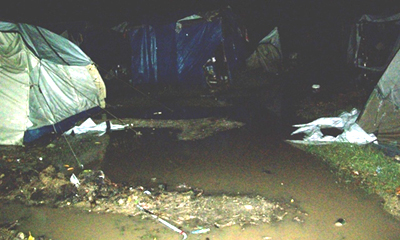 Floods at the refugee camps

“Before going to the polls, we have to have a house and access to food, health and education services for our children" said one of the organizers of the demonstration that took place on September 10, before the government building. "Each time it rains, our tent is flooded and we have to take the water out. Sometimes we have spent the night awake amidst a great amount of water that becomes mud the next day" said  Jocelyne, a mother of three, who lives at the camp of the San Luis de Gonzaga school in  en Delmas 31. The elections will take place on Sunday, November 28, with 19 candidates presented.
During the month of September, several hurricanes such as “Igor” and “Julia” that hit the Caribbean, did not reach the coasts of Haiti but provoked rains that flooded the refugee´s tents. On the afternoon of September 24, Puerto Principe was hit by a hurricane.

Sonia Adames carries out intense work in the Dominican Republic, a country receiver of many Haitian immigrants, as well as playing an important role during the earthquake emergency when the JRS was in charge of coordinating aid and take part in the different commissions set up to face emergencies. Sonia Adames will tell us about the work carried out by the JRS in the Aid Platform for Haiti.