With the title  “Migration Impact on Education”, members of the three Fe y Alegrías explained to the audience the effects of this phenomenon in the education world and the possible measures to adopt. Each one of them presented a real case.

Bolivia presented the report  "Maturing without parents" -promoted by Entreculturas and published in Spain last April, a study that shows how Bolivian students live the absence of their parents. Ecuador shared the way they tackle the multicultural reality of their schools with both immigrant´s children as well as immigrant children from neighbouring countries. Fe y Alegría Italy talked about their experience with Latin American students who arrive in the country to study secondary school.

Among the main conclusions was to adopt an intercultural/pedagogical perspective at the face of immigrant children or immigrant´s children and special teacher training for immigrant contexts. 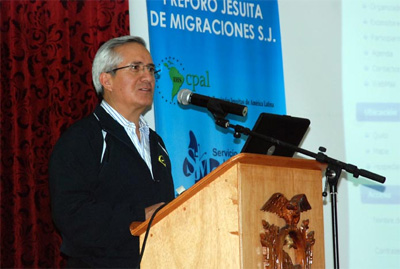 On the eve of the forum, from October 4-6, the Pre Migration Ignatian Forum was held with 94 people attending  from 29 countries of the 5 continents, seeking priorities, defining action processes and articulation of apostolate at a global level.

The conclusion was that a local answer is required from Fe y Alegría in each of the countries and also to articulate efforts with other institutions. Especially with the Jesuit Refugee and Migrant Service Network in Latin America and Caribbean, to share the good practices they have been carrying out for years.

Likewise, and also previous to the WSF 2010, a space was provided for 100 youth from several parts of the world to debate on migration. The goal was to enable them to elaborate their own Declaration to be given to the mayor of the  city and to contribute to the final Declaration of the IV WSF, 2010.
Another intention of the Pre Infant -Youth Forum was to mature on a proposal to articulate  a World Network of Youth Organizations on migration issues. Our technical staff member in Murcia,  Jessica, travelled to  Ecuador  representing the Entreculturas Youth Solidarity Network in order to get close to the work groups attending and to show interest in taking part in this movement in the face of the migration reality that affects us all.