Entreculturas allocates a prize to education infrastructures in Argentina 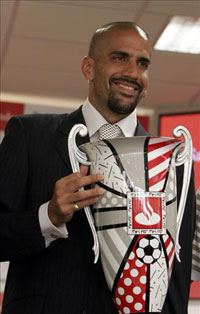 The Argentinean football player, Juan Sebastián Verón, with his team Estudiantes de la Plata, was selected last December as the best player in the Copa Libertadores 2009, that Banco Santander has sponsored for the past two years. He decided to give half of the prize to an NGO, Entreculturas and Fe y Alegría-Argentina, donating 30.000 dollars.

The money will be used to improve education infrastructures in El Chaco, in the North-eastern part of Argentina; the estimated direct beneficiaries are 90 children between 13 and 18 years old.

Entreculturas considers that school is a great tool for promotion and community transformation, because of the great social impact it generates, not only in the direct beneficiaries but also in their families, neighbours and other social agents. Each of the schools and specially those promoted by Fe y Alegría, become true community, civic and social centres with a great number of activities and initiatives.

This is why Entreculturas wishes to thank Juan Sebastián Verón for his generosity and his commitment with the most deprived areas of his country.