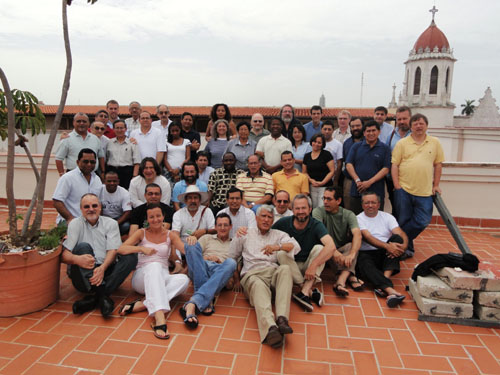 CPAL is mainly centred on the work done with migrants and refugees (Jesuit Refugee Service-JRS and Jesuit Migrant Service-JMS), on the apostolate in the middle of communities and indigenous villages and in different social assistance works. According to CPAL, "the social sector is not understood only as specific to some Jesuits, but as an essential dimension of the apostolic labour".

In first place, the Social Centres Network assembly took place, where the CPAL social sector general picture was reflected upon and the programs currently being executed were evaluated (information and communication - Latin America current juncture analysis - political incidence - systemizing of the political and civic education programs). In addition, it was agreed to start two new programs: Sustainable Alternative Development and Social Centres Sustainability.

The second moment of the encounter started with the arrival of the social delegates from the Regions and Provinces. Attendees, in dialogue with Msgr. Juan de Dios Hernández SJ, assistant bishop to the La Habana archdiocese, and father Jorge Cela SJ, Cuba regional superior, had the opportunity to know some aspects of Cuba's current socio-political, cultural, religious and ecclesiastical situation. In turn Ms Caridad Del Rosario Diego, responsible for the Religious Affairs Office of the Cuban Communist Party Central Committee, offered her views on the current state of the

During the last two days of the encounter, the social delegates from the Regions and the Provinces shared the Social Sector dynamic at continental level trough its networks (JRS, JMS, Indigenous Apostolate, Social Centres) and other initiatives like the Global Ignatian Advocacy Network - GIAN identified as the incidence Networks of the Society of Jesus.

As a result of the encounter, the participants elaborated a base document as action horizon in which they made clear their commitments and, amongst other things, defined as a priority issue in their agenda to support the apostolic needs in Cuba, Haiti and Amazonia.