Zimbabwe has been, since its independence in 1980, a place of settlement for hundreds of thousand refugee people. The neighbouring conflicts, like Congo Democratic Republic, Burundi, Ruanda or Mozambique, forced people to take flight and install themselves there during the decades of the eighties and nineties, in refugee camps like Tongogara, where 3.500 people live still today. In those days, Zimbabwe’s situation looked much more hopeful than that of its neighbours.  However, today the country fins itself in a situation of true chaos and serious humanitarian emergency.

One of the main reasons is the economic crisis, made worse after the 2008 elections that served Robert Mugabe to perpetuate himself in power through fraudulent means.  The outbreak of violence provoked by the elections forced most factories to close, and so all the food in the shops is imported from South Africa and hence very expensive. The rate of unemployment is 80% and it has the highest rate of inflation in the world, which leaves most families in a situation of absolute poverty. Life expectancy has come down to 46 years from 62 due mainly to malnutrition, the health service collapse and the spread of infectious diseases, such as cholera and tuberculosis. Due to unfortunate agricultural policy, bad crop planning and last season’s poor rains, the farm output has been reduced to a minimum. In addition, since the 2002 agricultural reform, items such as seeds, fertilizer or pesticide cannot be bought and the farming sector hasn’t been able to produce enough foodstuffs. The country suffers as well frequent power cuts and supply problems. 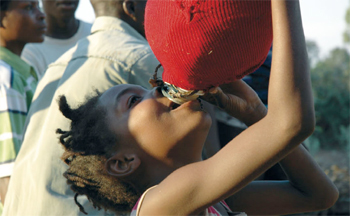 Because of all this, life in Zimbabwe has become extremely difficult for the majority of the population, And respite this it continues to receive refugees from Congo Democratic Republic, Burundi, Ruanda, Somalia and Ethiopia. Approximately 70.000 internally displaced persons living in illegal settlements are in a worse situation than the refugees. Their homes and businesses in the city of Harare were destroyed in 2005, because of a controversial urban reorganization program carried out by the government.

Since 2008, Entreculturas support the Jesuit Refugee Service (JRS) work in Zimbabwe to improve the life condition of both, the refugees and the internally displaced people. JRS has been working for 13 years in this country with refugees and asylum seekers, closely cooperating with the United Nations High Commissioner for Refugees (UNHCR) and other partners such as World Vision and the Department of Social Services of the Government of Zimbabwe among others.

Tongogara: a better quality of life

In spite of the country’s difficult situation, the life conditions of thousands of refugees has improved notably as a result of the work of JRS supported by Entreculturas. In addition to the humanitarian type help, centred in food and clothes distribution, a great effort has been made to provide access to quality education.

The first big actions in the camp were the extension of the San Michael School and the creation of a library – the only quiet reading place in the camp with more than 2.000 users and where most pupils go to study, and there has been more. In 2010 25 pupils were able to continue their secondary schooling thanks to bursaries granted by our project, and nearly 60 received sawing professional training.

Thanks to this training, a group of 20 men and women have already been able to enter the workplace, something hard to imagine when arriving at the camp. Through their work sowing school uniforms for the neighbouring school they earn enough income to maintain their families.

Due to the vocation of JRS and Entreculturas to promote change, as an integral part of the education that it promotes, and the fact that the large majority of Tongogara’s population has fled from highly violent conflicts, a number of workshops on education for peace have been organized in which the community leaders have participated..

Lots of work to be done 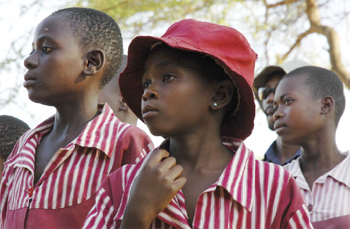 It is clear that commitment to education is one of the best forms of raising living standards for refugees and displaced population, consequently Entreculturas, hand in hand with JRS, will continue working with this approach not only in Tongogara but also in the regions of Checheche and Chishawasha, were a large portion of the internally displaced people live in straw and plastic shacks, infested by mosquitoes and risking being flooded during the rainy season. Coping with live is still more complicated for them: as land proprietors charge exorbitant rents, they don’t have much land to plant crops. They pay these rents with the sporadic income they get working as unqualified labour in the nearby town of Chishawasha. The salaries they receive are minimal and therefore they can hardly sustain their families or send their children to school.

For this reason Entreculturas also supports JRS in its work with internally displaced people, mainly centred in promoting access to quality basic education. One important part of our strategy from now on is to help paying the children’s school expenses. An important objective is centred on the more vulnerable children of the San Peter neighbourhood, in Checheche, that became orphans due to the political violence in 2002. JRS acts so that these children can at least complete the first levels of their education. It also supports vulnerable families with foodstuff and seeds so that they can compliment their sustenance, which now is much reduced

We are presently looking for support to continue our work in Zimbabwe with refugees and displaced people. Because they have every right to get education like everybody else and, in an emergency like the one that thousands of people in this country live, it is a key tool for change, both to better their lives in the short term and to get future opportunities.