Too many emergency exits in this world 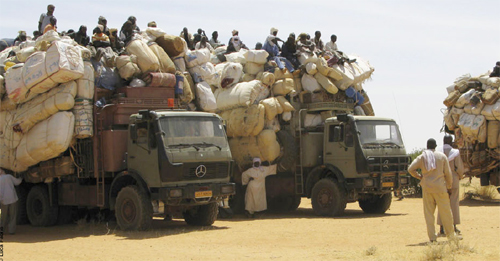 In these last few years a dramatic increase has taken place in the number of internal refugees and displaced people in the world. More than 40 million people in the whole planet were forcibly displaced as a result of armed conflicts, natural disasters, famine and persecution. This is the highest figure since the mid nineties, according to the latest statistics published by UNHCR (United Nations High Commission for Refugees). On occasion these people are displaced within their own country, either because other areas offer the necessary security or because they don’t have the means to cross borders: They are the internal displaced people and they are more than 27 million.

If we could see the world population as a map, we would see thousands and thousands of people on the move, relocating to a different city, a different country, crossing oceans, loaded with everything they have – a basin, a bag of clothes – and leaving behind everything that made up their lives up to then. The humanitarian problem that this massive exodus creates is enormous. The places where they go usually don’t have the infrastructure to support their presence or meet their food and shelter necessities.

Five countries are hosts to the majority of refugees and none of them, with the exception of Germany, belong to the G20: Pakistan, Iran, Syria, Germany and Jordan account for 47% of the total refugees. Afghanistan, Iraq, Somalia, Congo Democratic Republic, Myanmar and Colombia present the other face of the coin: the country from where their people must flee.

During these months in which we are aware through the media of the situation at airports, of the massive road exits looking forward to our holiday rest, we want to remember, we want to put ourselves in the shoes of the millions of people that violence, fanaticism, the cruel nature or injustice and corruption have deprived of their past and send to start a new life from zero.

There are too many emergency exits in this world; will they find us at the other side of the door? , if only the 20th of June,  Refugee World Day, the support of the work we do jointly with the Jesuit Refugee Service to accompany, serve and defend these millions of people,  opens the door to hope.

Education: A remedy for intolerance and a formula for survival and integration

Young boys, young girls and teenagers (less than 22 years) amount to 52% of the total 43 million refugees in the world. The majority of this segment of the population hasn’t guaranteed access to education in spite of it being an internationally recognised right. The importance of implementing this right is already a key issue to achieve the Dakar and Millennium Development goals in the education area.

Education offers well proven benefits to the displaced and sheltered population. Education in these environments is useful above all because it provides protection and facilitates a safe and monitored environment. The risk of exploitation by drug traffickers, conscription or sexual commerce is everywhere and constant, because of this the schools are the place where families try to guarantee their children’s safety and access to a framework of normality.

“So I became a refugee, without knowing what it meant. In a few days I caught the meaning : now I was a person with no voice”.

In addition education does not only provide protection and family stability, it also helps in the acquiring of certain skills to prevent risks derived from the crisis context in which they live such as: health and hygiene habits, VIH or antipersonnel landmines security.

In the face of the serious situation that the refugee and displaced population confront daily the psychological and social support that the educational centres provide becomes really necessary. Many boys and girls have gone through traumatic experiences and have to face very difficult situations, specially the more vulnerable social groups such as girls, handicapped children or members of ethnic minorities.

The situations resulting from displacement and sheltering seldom allow us to look at the future. Survival becomes a daily challenge and in this sense, access to education implies building capacity and skills for the future. Working with a focus on reconstruction may strengthen cooperative spaces and relations.  While the young go to school, the adults can devote themselves to activities to recover the productive fabric and the generation of income, the anxiety produced by crisis and conflicts is thus reduced. 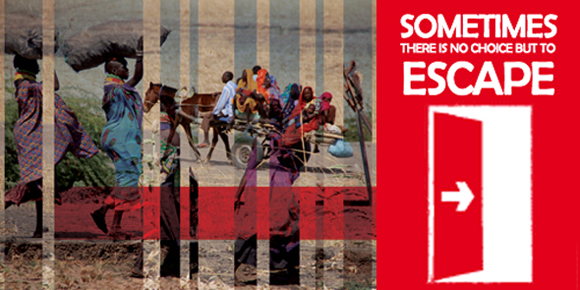 Schooling implies a socializing process that gives the refugee and displaced population the necessary knowledge to live together in community. This integration reinforces new attitudes that contribute to give stability to the communities promoting peace, justice and reconciliation.

The majority of the refugee population will remain so for an average of seventeen years and we cannot renounce to educate a whole generation of children and youths, especially knowing the side benefits of this education. Although the displaced and refugee populations receive little international attention in general, Entreculturas, through the Jesuit Refugee Service (JRS), uses educational initiatives to regain dignity for this vulnerable collective,  with a view to empower it and guarantee its rights.

We must consider the benefits of education amongst refugees and displaced persons as a necessary task, as it allows the building of opportunities in what is the most adverse context, both in their countries of origin or in those hosting them .

“One day we’ll go back to our land, where peace will reign and we will all live together we will, build our lives, and we shall have the opportunity to plan our future anew”.

On the other hand, education plays a very important role in improving the comprehension of displacements and sheltering, their causes and the consequences at the personal and social level. The movements of people worldwide in search of conditions permitting human life have been a constant throughout history. In our time, the increasing globalization and interdependence have given this fact added relevance and complexity. The motifs that drive or force people to migrate get more complex (shortage of natural resources due to environmental reasons, conflicts, economic resources shortage….) and the volume of movement’s increases.

Boys, girls and teenagers are affected by this fact in diverse fashion. Some times it is themselves that have to migrate, some times it was their parents who migrated before they were born or who left leaving them behind in care of some relative. Other times they are the ones that share daily the school with boys and girls from other places.

The role of Education for Development oriented towards the younger people can contribute a fundamental value, as it helps to develop the capacities needed to manage the way this reality affects them in a constructive manner:

Because of all this, Entreculturas addresses these issues in its educational projects taking place in Spain, as we are convinced that this is the best way to build solid and lasting changes that come from the people themselves and transform the cultural and social structures that sustain the injustices lived by refugees and displaced persons.