They are breaking the silence: the voice of women from Ixcán, Guatemala

Cecilia Vázquez is Mexican but she leaves in Guatemala where she is the General Cordinator of Asociación Puente de Paz (Ixcán, north Quiché). In a population of 80 billion 63 per cent are women and 88 per cent are indigenous.

Guatemala experienced an internal armed conflict. In Ixcán people were subjecting to military control; 102 massacres were committed and 1.500 people were killed. Also 90 per cent of the population moved to Mexico, where Cecilia knew this reality. Once the conflict was over, in 1996, Cecilia and many refugees went back to their communities of origin in Guatemala. 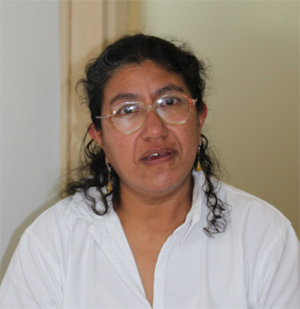 The Puente de Paz Association has successfully transformed society. It is an association made up of women and men who contribute to promote processes of social transformation in Ixcán and in adjacent communities, mainly with and from women. Women have been either victims of the internal armed conflict or victims of the structural violence due to a violent culture where women were subordinated to men. Cecilia talks about the different forms of violence against women and how they supplemented themselves. That´s why Puente de Paz is working to make sure that women from Ixcán and their communities see themselves as individuals with rights, that they participate on equal terms making decision about issues which affect their interest, that they have self-confident, and that they can demand their individual and collective rights

This process or transformation requires two levels: community level and regional level. At the community level they work on promoting women´s identity and on encouraging them to make decisions. Women can nowadays attend to assemblies in their communities and give their opinion about different issues such as land, water and harvest. "An indigenous woman couldn´t talk about land issues for it was seen as a man topic, says Cecilia. At a regional level, the network of women´s organizations of Ixcán (ROMI in Spanish) coordinates all women organizations and set global meetings with delegates of each community to talk about new initiatives. One of the latest successes of this network has been approving community agreements about the regulation of alcoholic drinks. "Men drink a lot alcohol, spend family funds, cause fights and when they come back home they become violent with their women". Cecilia says that´s the reason why women asked for a regulation about alcoholic drinks and about its sale. In Guatemala, the sale and consumption of alcoholic drinks are allowed but as they are members of a community they can have their own laws. "And this is how we could establish community agreements against the sale of alcoholic drinks" Cecilia told us.

Women have become individuals with right. When we asked her how men live this change Cecilia answers that "when a change in the situation of women is done, also a redistribution of power needs to be done". This involves two important challenges. Women feel pressured from their families. Also becoming the authority is hard for she has to work, to take care of the children, to be a housewife and to contribute to family founds; and being the authority is something else they have to do. Therefore the challenges to redistribute the power are very big and involve structural changes in the context of participation" says Cecilia.

We asked her for a success example and she told us about "a group of 15 youth people of a community who wanted study secondary and had to leave the community to do so. A group was formed and twelve out of them ended secondary. They grew up personally without leaving their communities. Later on many young men registered and they all leave together as students. In the end what we do is creating different ways that people interact with, and this is such a good example". 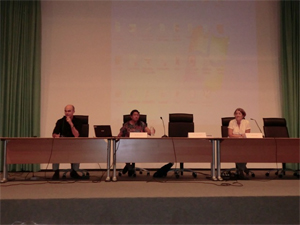 Entreculturas has been working since 2008 with the Puente de Paz Association as a local member. Two projects are currently being developed:

Cecilia left Madrid to go to Seville and to Huelva where she has held two conference under the title "They are breaking the silence: voice of women from Ixcán, Watemala" And as she says, "We must continue fighting to promote our rights as women".