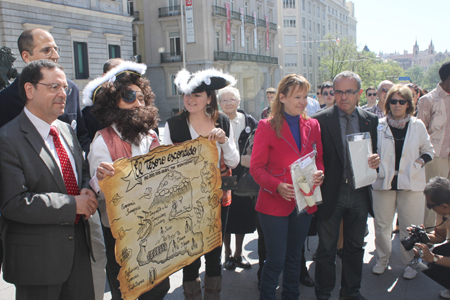 Deputies and members of the EAPN-Spain showing the map of the treasury delivered as offer to reduce the tax evasion. / PHOTO: ONGD's Spanish Coordinator]

The thing is clear: 90.000 million Euros might be collected if we fight effectively against the tax evasion, the tax havens, etc. This is what the Alliance has been trying to make clear in the Congress with the delivery of a "map of the Treasury". This map indicates where they can get the money necessary for the reduction of the deficit and the guarantee of social rights such as the health, education or cooperation for development.

The Spanish Alliance against poverty represents more than 5 million persons. They consider that their efforts are not enough for this situation. According to Jorge Serrano, coordinator of the area of Studies and RRII of Entreculturas and member of ONGD's Coordination, "if the General Budgets 2012 are approved by the announced cuts, million persons, in our country and in the whole world, will have a few pernicious and dramatic consequences".

On the other hand, the Consejo General del Trabajo Social (CGTS) - General Council of Social Work warns about the increase number of persons in risk of exclusion as consequence of these cuts. "The demand for the municipal services has already increased up to 250% in some cases ", emphasizes the president of the CGTS, Ana Lima.

Gabriela Jorquera, from EAPN-Madrid, affirmed that "more than 12.5 million persons in Spain are in risk of poverty and exclusion, plus hundreds of millions of persons who are beneficiaries of the Spanish cooperation which budget is being reduced almost to the half: 47, 6% ".

For that, it is important that this crisis has not been paid by need people. "The fiscal system does not redistribute effectively. Some people are better off with this crisis: the speculation and the banking.
And, if instruments are not created rapidly to avoid the fraud, we will not be able to charge for taxes to most people who are being enriching during the years of crisis" Pablo Martínez concluded, of the Platform 2015 and more.

In the ceremony some organizations were present such as Izquierda Plural, Grupo Mixto, EAJ-PNV, PSOE, UPyD y CiU, which received the offer from the Alliance. "The map of the Treasury" and the fiscal proposals were given to all the parliamentary groups in order to increase the income of the State and to redistribute it in a better way.

The offer delivered in the Congress has comparative information on the capacity of collection of our public Estate with regard to the nearest countries and on the social investment that has assigned in budgets: Spain is far below of the average of the EU in social investment. It should go from the current 22, 7% to 30% of the GDP to reduce this gap.

Also the review of measures has been considered the "fiscal amnesty ", which rewards to defrauders and people with big fortunes. The fiscal amnesty does not help to relieve the disparity of the Spanish fiscal system. Other concrete offers have also been incorporated into the debate on the Budgetary Law.
It is necessary to change the image of the taxes, the socially unacceptable tax evasion, to fight against the fraud with human resources and to carry out a tributary reform for a fiscal and distributive justice

Likewise, they gave the following letter with the map:

The General Budgets are unfair and only for rich people

The Spanish Alliance against poverty rejects the General State Budgets (GSB) for being unfair, disproportionate and unsupportive. The approval of these GSB there would suppose a break of the social and political consensus expressed by the Agreement of State against poverty, signed by all the political forces in 2007. It established in this agreement to achieve that 0,7 % of the RNB for AOD will in 2012 and to assume the objective of the National Program of Reform in which Spain promises to diminish the risk of poverty and exclusion up to reaching a number between 9,1 and 9,2 million persons in risk of poverty and exclusion in the Spanish condition.

The GSB affect brutally in the cut of social investments, and in an unnecessary way, because of the lack of growth in the income of the State. Approximately 40.000 million Euros would be collected, chasing the tax evasion with a level of efficiency similar to the European countries. That means more than the cuts proposed by the budgets. It might be collected 3 times more money than the help reduced for development with a tax to the financial transactions (1.630 M €).

The GSB do not contemplate the best possible alternative to the social cuts: to reduce the tax evasion in the highest salaries which are the principal responsible persons. The Alliance knows how to do it and we will explain it to Ministry very soon. 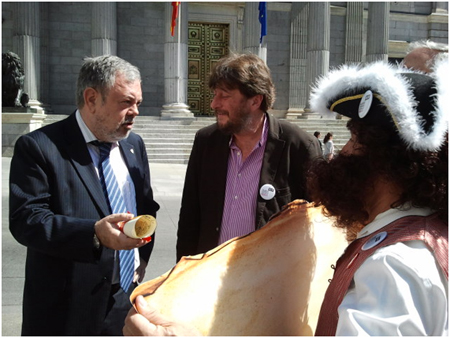 Members of the EAPN-Spain, dressed in pirate, delivering the map
of the exchequer to the deputies. / PHOTO: EAPN-Madrid

As the major Spanish Alliance of social organizations and development, we demand them that the collection of taxes must be rational and with a distributive justice. We denounce the measure on "fiscal amnesty" that rewards the defrauders and repeat the need to obtain effectively fiscal resources.
We urge Spanish Government to respect his commitment with the fight against the poverty, with the Human Development and with the Aims of the Millennium. In any measure to go out of the crisis the priority must be the persons. These measures must be based on the universal solidarity and the human dignity.

For the Spanish Alliance against poverty a solidary and unfair budgets have to contemplate as minimum the following points:

It is necessary a change: Government has to respect to the citizenship that represents them and guarantee the solidarity, the well-being and the social rights of all persons. We urge Government to answer for the most serious consequences that the disproportionate measures of adjustment will have in million persons under as consequence of "reduction of deficit".