Same 17 countries continue to recruit children to serve as soldiers

The data on the numbers of children soldiers all over the world remain incomplete but Governments and armed groups from at least 17 countries such as Afghanistan, Sudan, Democratic Republic of Congo or Yemen continue to recruit minors, according to data provided by the United Nations. Amnesty International has also been able to verify that in 2012 Mali jointed the list. 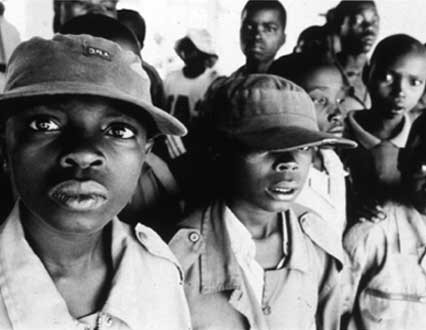 "We must regret the impact of the rise in the number of countries which recruit children to serve as soldiers. Amnesty International observed last January how armed Islamist groups are recruiting children between 10 and 17 years old", said Carlos Sanguino, responsible for what has to do with minors in Amnesty International. " Last 20 January at least four of these child soldiers were killed during the fighting between the armed Islamist groups and Malian and French military forces which conquered the city of Diabaly".

Thousand of children are every day caught up in armed conflicts, they are being used to commit atrocities and suffer abuse, humiliation and rape. They also become witnessed of killings. They are not always actively involved in the fights; supporting functions are also assigned to them. This supporting functions involve considerable risks such as being porters of wounded soldiers, of ammunition, being spies or messenger, and for girls, they sometimes are being forced to serve as sexual slaves.

However, in 2012 considerable progress has been made to curb the use of minors as child soldiers. Two judgments of The International Criminal Court and of the Special Court for Sierra Leone have expanded the scope of the accountability, established groundbreaking jurisprudence in the recruitment and use of children in armed conflict, which is considered as a war crime.

On 14 March 2012, The International Criminal Court condemned Thomas Lubanga on recruiting and enlisting children of 15 years old in its armed group, the Forces patriotiques pour la Libération du Congo (FPLC), and on making them participate in hostilities. On the other hand, on 26 April 2012, Special Court for Sierra Leone stated the former President of Liberia, Charles Taylor, guilty about the complicity with the Revolutionary United Front in the commission of war crimes in the civil world, which lived in Sierra Leone between 1991 and 2002, such as the use of child soldiers.

"The two judgments set relevant precedents and are useful to warn those who have committed war crimes and crimes against humanity all over the world that impunity for their crimes will not be allowed" expressed Yolanda Román, activist for Save the Children. "We hope that this judgment will serve to design concrete policies to guarantee the compliance with international law and prevent from recruiting child soldiers by armed groups".

In recent years and coordinated by the United Nations, many important action plans were signed to put an end to recruit child soldiers and to ensure their release in Central African Republic, in South Sudan, in Myanmar and in Somalia. In 2012 this number of action plans raised to 19. Around 150 countries have already ratified or signed the Optional Protocol on the involvement of children in armed conflict of United Nations, which remains the more important legal tool to protect for minors in conflict.

Since 2005 many children have been identified in armed conflicts. This is the reason why it is necessary to continue taking action to progress in this aspect.

On one hand, next 18 March United Nations might take a decision on a implementation of an international Control Arms Trade Treaty, a treaty which must regulate the transfer of firearms to countries where the firearms are used to commit human rights violations, such as using child soldiers.

On the other hand, it is necessary for the governments to priorities the rights of vulnerable groups such as minors. "Children who are used as soldiers cannot be considered as guilty, they must be treated as victims; many of them are recruited from the schools. We much continue to support policies which promote their reintegration into society", said Pablo Funes, responsible of Projects in Africa of Entreculturas.

In Mali, in January, a child soldier recruited into armed Islamist groups said: "I was studying with 23 students and a Koranic teacher. Two months ago my teacher´s grandson sold us to the Islamists. We jointed a group of 14 young people who carried weapons. At first I was told to work in the kitchen. We were scolded by the rebels during the Koran classes because they thought our pronunciation of the Arabic verses was not right". This minor also told us about his training: "They trained us to shoot in the heart or in the feet. Before the fight, we had to eat rice mixed with a white powder and a sauce with a red powder. They also gave us injections. They gave me three. After these injections and after eating the riced mixed with the powder, I wasn´t me anymore".

Request by the organization to the Spanish government

Alboan, Amnesty international, Entreculturas, Fundación El Compromiso and Save the Children have approached the Spanish Government asking for:

In Spain, the procedure against the use of children as soldiers is promoted by Alboan, Amnesty International, Entreculturas, Fundación El Compromiso and Save The Children. Its objective is to mobilize and aware the Spanish population about this reality, to lobby them so that the reality of this minors keep on political agendas, to conduct research and demand accountability. For more information: www.menoressoldados.org