“To reach a solution, they are capable to approach the assassins of their children, armed only with their word", Lisbeth Mora

Lisbeth Mora works at the Fundación Gumilla, a centre of investigation and social action that the Jesuits run in Venezuela and a local partner of Entreculturas. Founded in the 60s by Father Arrupe, it works on three interconnected lines of action : formation(both for citizen participation and for community leaders); investigation and analysis on the situation of the country and Latin America and communication with the Sic and Comunicación.

Pregunta.- How is the situation in a country where violence is one of the main problems?

Respuesta.- The Venezuelan society is taking giant steps towards violence. A violence that penetrates all sectors of society, all of people´s surroundings, from the daily life to the State´s structure. It is a violence that has crept into us and worst of all, it has become familiar. Because of seeing so much violence around us, we are making it part of our lives in order to survive. More than violence , we are talking about aggressiveness and elements to defend ourselves.

P.- Why does this violence especially affects the youth?

R.- Since childhood, the child lives violence at home in a family that often has no elements to educate their children aside from force, ill treatment or repression. There are many youth that are parents. A fourteen year old girl with a son, what elements does she have to be able to educate him adequately?
To assume adult responsibilities at such a young age starts generating violence symptoms in a family. Authority has to prevail somehow. This is more so when talking about girls bringing up their children alone, girls with no space for themselves, living with their families and their child. All their environment does not make a different life easy. They are children that cannot go out in the street because of insecurity since you never know when there is going to be a shooting in the park, in the street, they are children who grow up with many limitations.

The adults surrounding him should guide them, but they are not prepared to do so since very often their personal and family life is marked by violence. Es It is like a pandemic that is slowly consuming us without our being aware, since this is not new in Venezuela. A society does not suddenly become violent, it's like an illness that is slowly killing us.

P.- Why has school stopped being a safe place?

R.- Before, there were certain spaces of society that were respected: the church, a football field, the school. But this is no longer so. 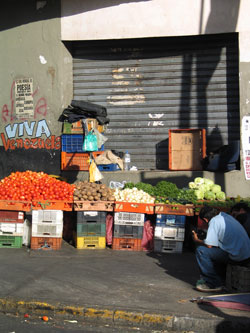 There are no safety measures and teachers are not prepared to handle the situation. There are very few cases of teachers and schools that have a peace initiatives in the classroom or peace judges at school.
Violence affects the child´s academic results, sometimes because they cannot go to school or because no one wants to work there. There are doctors who cannot go to their hospital to work. On some occasions gangs enter the emergency wards to attack and rob the doctors.

The immediate environment of a child, apart from school, is the community, a very violent environment for many reasons: unemployment, impunity, which stimulates violence. 92% of delinquency in Venezuela is not punished, from a small fault to homicide. The security system in Venezuela is very deficient. The security forces are also an active part of delinquency bands, which makes things more complicated since one doesn´t know where to begin: by the corrupt justice system or the corrupt street policeman. The State has no will to address this problem. For example in the border zones, where the Colombian factor is added, the irregular groups come and go as in a no man´s land.

P.- What initiatives are you working on, to face this problem?

R.- At the border zone, in Alto Apuro (Arauca), we have a Network of Peace without Borders, in which a series of organizations participate. We have education and church institutions that are trying to understand and study the characteristics of violence in the area. The idea is to start with training and accompaniment, to act in schools, with the families and whenever possible with public institutions.

At schools we have methods to resolve conflicts peacefully in the classroom, working at child level, with parents and with teachers. We have to understand all these groups, since if we only work with one of them, the child finds himself in a contradictory situation.

P.- How can a person develop with two such different realities?

R.- We have an experience, for example in the area of Catuche, with a group of women who have lost their children because of violence, fighting among themselves in gangs. These women have seen their children die and are now the mothers of their grandchildren. They say " they took away my children and they cannot take away my grandchildren, I have to do something about it." And they see that only armed with their word and with conviction they are capable to go to the side of their enemies, because they are the assassins if their children, to reach a solution. Because they know that beyond their word, they have no other weapon, the idea is how to reach minimum spaces that will allow them to live there. They have nowhere else to go. We have 18 women in this situation. Youth violence is very complicated, since there are increasingly more youth involved and this is very painful, because a child instead of being at school or in a football field, is with a weapon that could be perfectly well be used by a military. The age of delinquents in Venezuela is going down because they are dying due to their own violence.

Sadly, at local level, it is very important to be recognized, to be someone, and the road to violence is a way to be respected. The pacifying groups of Catuche try to identify activities that can be carried out together in special dates, at Christmas, Carnival, any significant date is good to stimulate encounters, cooperation. They also try to stimulate activities such as holidays, school reinforcement activities, computer courses, courses where they can talk to psychologists, social workers that often only listen to them, but this is often enough because they have to live with their pain, their resentment and their questions.

Around seven in the evening, when in Madrid, people start to go out, in Venezuela they start running away to their homes, looking for safety. Until a few years ago this only happened in Caracas, where there are 50 dead every weekend, but now it happens in all the country´s big cities. What are we, a society walking towards death? Are we just going to stand still staring at it?

The social Action Network is a net of nets where almost 20 organizations work, among them the Centro Gumilla together with Fe y Alegría, that started three years ago in Andes, Sulia, Lara, Guayana, Ciudad Bolívar, Caracas and at the border zones (where the Peace Network without Borders, works).

This year they started with an activity under the slogan "People can understand each other by talking to each other" to investigate the causes of violence at school and start overcoming this problem. They also carry out formation programmes, communication campaigns and public advocacy in order to design new policies and reduce the number of weapons in the street. There are six million weapons in the streets of Venezuela.

"We bet on life, because there is future in Venezuela and we want to present our weapons which are our word, education, living together peacefully, spaces to share, think and work together. At first we started to let ourselves be known as a series of institutions that want to promote peaceful living in Venezuela and later on we will design advocacy strategies. We have had a good welcome but what we want is people to realize that it is possible for youth to have different spaces. We will not give in to burying children and youth prematurely. If the State does not take on responsibility, we will. But the State will have to act since it will be the first to lose.

P.- Is this silenced by the media?

R.- At present, the media wnats to make news but there is no analysis of what is going on or transmission of values that muy help to overcome the problem. But they are interested in participating and transmitting messages by regions. In Venezuela the media has a great influence and it is very importsant to gain thier support and help. We want them to help us transmitting our messages.

P.- What have you achieved up to now?

R.- During the past years, we have trained around 2.500 people. Those who have gone through our training admit their personal benefit since they have strengthened and gained tools to help them handle some aspects of their personal, employment or community lives ; the importance of participation and the organization to resolve problems in a peaceful way. They also recognize the strengthening of community organization. People start to see that there is life beyond their doorstep, and that it´s good to go out.