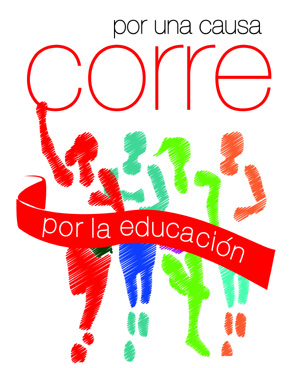 Entreculturas held in early January the II Solidarity Race "Run for a reason, run for education" which brought together nearly 6,000 people. The first edition took place last year in Madrid and, this time Leon, Arroyo de la Encomienda (Valladolid) and Seville have joined.

Seville was the first out of four scheduled races in the II edition of "Run for a reason, run for education". The morning of 20 January at Alamillo Park, at 9:30 am, began the 5-10km race for adults and at 11:30am the 350-1,000m race for children. A total of 730 participants, 450 adults and 280 children were registered. The initiative has been a total success of participation and all of the runners have showed a gesture of solidarity and for education in Haiti ", said Fernando Monsalve, delegated of Entreculturas in Seville. The day concluded with the awards ceremony in which the first ones to reach finished line received prizes and with the draw of two t-shirt of Seville F.C and Real Betis Balompié.

In spite of the bad weather, in León, more than 300 people run for Haiti last 27 January. The race began at the Jesuit School and after 10km it finished in San Marcos. Carolina Rodríguez, an Olympic gymnast, gave the starting signal and once they arrived to the finish line, the culture councilor, Juan Pablo García Valadés, presented the awards to the winners. Following this, the Alberto Comodín´s performance was held and a draw of products donated by sponsoring undertakings and athlete from Leon were made.

At Arroyo de la Encomienda, Valladolid, the rain couldn´t stop the race either. Nearly 650 runners have joined this cause of solidarity to promote the education in Haiti. On 27 January, after the starting signal, led by two great sportswomen from Valladolid-the athlete Mayte Martínez and the swimmer Laura López-, the participants started the 5-10km race which ran at a park close to the riverside. The councilor, José Antonio de Frutos, José Ángel Delgado Ávila and Anunciación Matías handed the award at the end of the race; along with the delegate of Entreculturas in Valladolid, Chus Landáburu, the volunteer Manuel Sánchez Cisneros and other representatives of some sponsoring undertakings.

In Madrid, the writer Julia Navarro was in charge of giving the signal to nearly 4,000 runners of the II Solidarity Race edition of Entreculturas. On one hand, the 5-10km race for adults was at Casa de Campo; at the Explanada del Puente del Rey entrance, next to Príncipe Pío station. On the other hand, the 350-1.000m race for the children was held at Parque de Atracciones whose auditorium held the awards ceremony, which the director of Entreculturas, Agustín Alonso SJ and the representatives of some collaborating companies attended to.

From left to right: the very first seconds of the race of the adults after the starting signal; the writer Julia Navarro, along with Raquel Martín (responsible of the area of awareness of Entreculturas) and along with Agustín Alonso SJ (Director of Entreculturas); Children of the 1,000 m race ready at the start sign /Entreculturas.

In addition to these four places, those who couldn´t attend to the calls of the race were encouraged to run in their cities and countries. In this mode of "Run wherever you want" many runners were registered in countries such as Mozambique and Dominican Republic, and, in Spain, in cities such as Alicante, Albacete, Gijon, Valencia, Murcia and Santa Cruz de Tenerife.