The Spanish coordinator of ONGD went to the Congress of the Deputies the last 28th of June. That day, the General Budgets of the State were approved definitively.

Some people in representation of the ONGD and of the Commission of Budgets and of the Cooperation of the Congress were presented at that meeting where a communiqué was read it and were given to members of parliament three documents to bear in mind at the time of taking decisions: the Spanish Constitution, the Declaration of Human Rights and the State Agreement against Poverty.

"Fulfil their commitments, act fairly, share out wealth, fight against fraud and protect to the most vulnerable people", it was demanded them.

Deputies of the political parts such as CiU, ICV, PSOE, PNV, and UPyD received to the coordinator of ONGD and the "Justice" itself. Here you can read (in Spanish) the "Speech of the Justice in the Congress. Fighting for Human Budgets".

Some piece of information 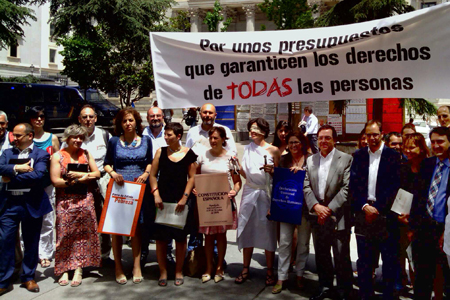 Cooperation is not a problem but a solution. Proposals:

• The public authorities shall promote favorable conditions for social and economic progress and for a more equitable distribution of regional and personal income within the framework of a policy of economic stability. They shall in particular carry out a policy aimed at full employment

• Everyone, as a member of society, has the right to social security and is entitled to realization, through national effort and international co-operation and in accordance with the organization and resources of each State, of the economic, social and cultural rights indispensable for his dignity and the free development of his personality

National Pact of State Against Poverty

• A political, social and economic imperative to fight against the eradication of poverty in the World with the appropriated and effective action for the international cooperation. To convert the policy of cooperation in a policy of State without being conditioned by commercial, political and economic interests.