Merlys Mosquera: "Colombia is the country with the highest rate of internally displaced persons" 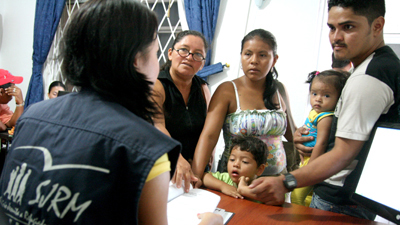 In terms of human mobility; what is the reality in Latin America-Caribbean? Is Colombia de “hot spot” in the region?

There are multiple migration flows In Latin America and the Caribbean: Mexicans and Dominicans moving to UUEE; Peruvians and Ecuadorians to Spain and Colombians that move to different latitudes. These last two groups are actually considered forced migrants. In one hand, the pervasive poverty and the effects of the 2010 earthquake have incremented the Haitians mobility indexes. With respect to Colombia, the armed conflict has converted this country into one of the territories with the highest index of internal displacement. In addition there are approximately 500.000 persons in border countries like Ecuador, Venezuela and Panama that need international protection. In this sense, one could say that Colombia is in effect the epicentre of the migration in Latin America.

What is the perception in Colombia of “hosting” (whether internally in Colombia, in neighbouring countries or in countries abroad)?

I believe there is a double perception with respect to Colombian people in the hosting processes, especially abroad.  In one hand, Colombians are welcomed because of their industrious nature, however, they recognize as well, that the atmosphere created around the narcotraffic and the associations with armed groups suppose a stigma difficult to ignore when establishing relationships with other people.

In your opinion, does human nobility carries with it conflict? Why?

I believe that history has demonstrated that the large human migrations are not necessarily a product of conflicts, although in most cases they suppose situations of conflict. Today, the human mobility phenomenon is subjacent to social or political conflicts, as in the case of Colombia with approximately 4 million displaced people. However, other phenomena like natural disasters are starting to appear as causes of displacement (an example of this can be found in the case of Haiti).

How can we intervene in the host societies so that migrant reception doesn’t generate confrontation?

One of the challenges that hosting societies have is to develop a collective conscience of the cultural diversity brought by immigration.  In addition, the manner in which this diversity is managed should benefit the keeping of social harmony. From an individual and collective point of view there are many successful experiences in preventing cultural “confrontations”, however I believe that promoting intercultural and multicultural dialog is the best guarantee for a good coexistence in mixed societies.