Every day children's thousands are subjected to extreme situations. They are used to make cruelties, suffering bad treatments and violations or they are transformed into witnesses of murders. There are not available data on the number of soldier children in the world; but there are governments or armed groups, of at least 15 countries, they continue recruiting smaller.

In 2010, actions were signed to put an end to the recruitment of soldier children and to assure their liberation in Afghanistan, Chad or Costa of Ivory. 142 countries have already ratified the optional Protocol in order to the participation of children in armed conflicts of United Nations, the most important legal tool for the protection of minors in conflicts.

In 2010, more than 11,000 soldier children were released in countries such as Sudán, Democratic Republic of the Congo or Myanmar. For better results, we consider that States have to give priority the promotion of Human Rights and protection of groups in situation of major vulnerability as the minors.
In spite of prevention and demobilization, it is fundamental the rehabilitation and the reinsertion of soldiers to fight against this reality. The psychic and physical sequels are provoked by their participation in a conflict, impacting in their personal future, in the possibilities of development and in the communities where they live. Once they have been demobilized, their rehabilitation must be physical and psychological and in the reinsertion in the environment of the family and community.

"To fight against soldier girls in an armed conflict is in a long-term. Our work depends on the resources for the rehabilitation and reintegration projects. This program must start before the end of the conflict, promoting the family and community support to minors in order that they can return to be part of that society in where they felt they lost their roots after their recruitment", said María Calderón, ex responsible of a rehabilitation center for solider children in Democratic Republic of the Congo of Entreculturas. Education is an essential tool for reintegration (basic and professional training) that allow increasing the knowledge and employment opportunities; and, moreover, to contribute the personal and community development.

Inside the rehabilitation and reinsertion mechanisms, it is necessary to incorporate to the soldier children according to the asylum application. For example, the Asylum Law in Spain of 2009 does not include as a reason to apply for asylum for having been a soldier child in a context of conflict.

There have been advances but the pending challenges are even very important. A growing concern exists on the use of children to transport explosive in the conflicts, as part of armies or armed groups. Children, even with some disability and the age of only 8, are used as a bomb unconsciously. According to the United Nations in Iraq, terrorist groups use children to spy and to recognize the area, to transport material, military teams; to install devices and to participate in attacks. This situation has provoked the death of at least 194 minors during the 2010 in the country.

It is known about the participation of children in armed conflicts from 2005. The new instruments and scenes of war included the use of the new technologies and the lack of combat fields and identifiable opponents. It supposes the bigger risk for the children in the military operations.

Nowadays, there is no firm and strong Treatment about arms trade which regulates the deliveries to countries where are used to commit violations against Human Rights. On 13th February is the last previous meeting for the preparatory conference about this Treatment which has been planned by July.
"It is necessary to put politics and concrete procedure into practice to guarantee the International Rights and to prevent the violation of the Children Rights", explained to us Yolanda Román, responsible for political incidents in Save a Children.

To participate in an armed conflict sometimes supposes that children are not considered victims but guilty. The States are arresting more and more children for their alleged relations with armed groups. When they are captured and under arrest, their conditions are not in compliance with the minimum regulations established by the international legal tools.

In many occasions, the children are recruited in the school. In Somalia, only in June 2010, professors and administrative personnel were forced to give 300 children to armed groups for their training. We believe that schools must be peaceful areas where children have protection and education, regardless of a context of conflict or an emergency situation, said Román. 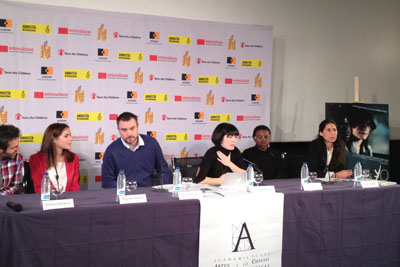 The organizations Alboan, International Amnesty, Entreculturas, El Compromiso Foundation and Save the Children have sent a letter to the Spanish Government with the following points:

In Spain, the cause to stop the use of child soldier is promoted by organizations as Alboan, Amnesty International, Entreculturas, El Compromiso Foundation y Save the Children. The main objective is to make the Spanish population sensitive and mobilize them to face this reality. To have a bearing on the reality of these minors is keeping the political agendas to make investigations and demand responsibilities.

Thursday 9th February, these NGOs supported the premiere of the movie "Aquel no era yo" directed by Esteban Crespo. This film is about the problems of the soldier children when they return to how they were after doing what they had to do. During the morning, the film was presented to the media in a press conference in the Academy of the Arts and the Cinematographic Sciences. In the evening, the general public could watch the film in the Sala Capitol in Madrid. 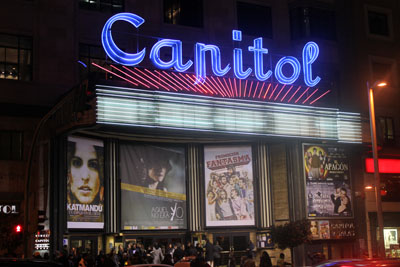 The presentation in Capitol was a great success. The forum was completed 15 minutes before starting the act. The event was moderated by the journalist and presenter Cristina Saavedra. She spoke about the situation and reality of children soldier's thousands in the World in name of Yolanda Román, responsible for political incidents in Save a Children. After her intervention, the technical team of the film went up on stage. Finally, the film started after the speech of the director and the main actors.