Interview with Anne Minguet “In Chad we speak of male teachers, but we can’t say much about female teachers”

Question.-Your actual position and work and a biographic resume of your passage through Africa

Answer.-I'm French but I've had the opportunity to go to Africa, specifically to Benin, a country in West Africa. I was eleven years in a secondary school until the government nationalized the schools and I went back to France. I took a sabbatical year and then a project of the Christian Education Sisters Congregation presented itself. A community was being created in Peru, specifically in the Andes where I spent ten years. After this time the community retired and I stayed in Peru working on two different projects for 5 years. The first one was a citizen education project in the rural areas motivated by an election year. With this project it was intended to support the sectors that didn't have education and teach them to read and write so they could exercise their right to vote if they so desired. The next project, rather unusual, was with the Peruvian National Police and it consisted of offering human rights training to the police and show how the national police and the justice administration work toghether.

Q.-What was the result of the second project?

A.-The result? I can say that it was pretty awful by looking at the way the Peruvian police work. But it was also very interesting. I believe that there was an awakening in the police about their responsibility in the human rights issues. I've heard policemen say that they were aware of themselves having violated human rights but that they didn't know they were doing it. It was an interdisciplinary task between teachers, psychologists and lawyers, always relating strongly to the project coordinator. 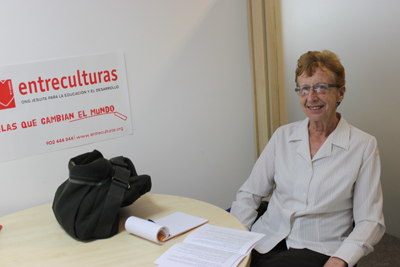 Q.-What was the project called?

A.-No. It was a short Project and it finished. Just then Fe y Alegría crossed my path. They needed someone to go to Iquitos to take charge of the management and coordination of a global network of schools. I began working with them 13 years ago. I was 9 years in the Peruvian jungle. Peru has three very different zones; the coast, the jungle and the sierra. The coast and the sierra are generally better known as Machupichu is there; the jungle is less well known. It is a very complex reality that occupies half of the Peruvian territory with a very low density. In the jungle the communication channels are the rivers.The teachers in Iquitos that go to Putumayo, in the Colombian border, take a month travelling to get to the school. There are many ethnic groups, languages and cultures in the jungle and articulating this was very difficult.

Q.-What problems other than communicating did you find?

A. The first thing that shook me was the way they speak. Children having completed primary education being unable to read write or count. They ended as they began. This is really shocking. Another problem was that teachers didn't get to their schools, or didn't have professional qualifications. There was a lack of academic and pedagogical training amongst the teachers. The books that the Ministry publishes for the schools don't know the reality of Amazonia. They elaborate school manuals based on the coast or the sierra but nothing for the Amazonian people. They make terrible mistakes about the Amazonian people culture.

Q.-How did you approach developing the teacher's capacities?

A.-There are three issues I fought for: that the teachers arrived to the school every day, that they had the lessons prepared and that the class imparted made sense.

Q.-How did you articulate those three fights?

A.-Little by little, with the whole team. First you have to make the teacher feel loved, touch his or hers affective side which is very important. Second we gave them emotional support, support for their work and support to group work by all the teachers through the global network. What was important was that they didn't feel isolated.

Q.-The conference you are giving in Valladolid is about Rural Education in Peru and Chad, what have they got in common these two contexts?

A.-Fe y Alegría Chad started in 2007 and there was a certain affective kink to Peru. José María Veláz always wanted to establish himself in Africa. The one that started Fe y Alegría in Chad was a Peruvian jesuit; this is why there is that link between the two countries. Also they have similar climate. This jesuit asked for me to go and support Fe y Alegría Chad and during 2008-2009 and 2011 I visited Chad in different periods of 5/10 weeks to accompany the child's delivery.

A.-In Chad existed already a rural network and with the experience I had in Peru I could help to create and consolidate this network. The first year I dedicated to working on the identity and how Fe y Alegría worked and how this could adapted to an African country. I knew I had to fit the reality, begin from their experience and expectations and see how the Fe y Alegría could act.

The first year I dedicated it to knowledge, to see how we understood education, trying to see little by little how to build things with them. The second year I worked more on consolidating an educational project. French is a vehicle language, but Arab and ethnic languages are also spoken. The ministry doesn't send teachers to small communities. It is not that there aren't any trained teachers, but that the State doesn't want to hire them because it doesn't want to pay them. The community chooses among its members the one with the highest academic qualifications as teacher. Sometimes it is someone with a high status in the village, and the community pays him or her, with millet, on which alimentation is based, or helping them cultivate their land. Getting trained teachers is a big challenge. The children arriving at the school speak Arab, and you are going to teach them t or read and write in French. There isn't any material support to adapt their teachings to the local culture or learn to read in a language that is not theirs.

Q.-What is the woman's place in Chad concerning education?

A.-That is another very important challenge. We speak of male teachers but there is not much we can say about female teachers. They occupy 4% of the total at national level. In respect to access to education there are many limitations. The main reason why women don't receive an education is early marriage. The low regard that society has of women as students also counts. To society the woman must dedicate herself to domestic tasks instead of going to school. The women's situation is very complicated in this context.

Q.-What can be done about it?

A.-We are carrying out an awareness program with the mums. During one children's school matriculation day a mum came to me and told me that she had studied up to third or fourth level in primary school and after being given away in marriage she had to leave the school. The mum wanted to matriculate her daughter so she would have the opportunity that she missed.

Q.-Are these issues the reason for education being so important?

A.-The work is done with the community as a whole, not only with the school but with all the community and, above all, in the rural areas. The school is perceived as an answer to the needs of the community. The Chad educational project is based on the school meeting the community's needs, helping in its own development. In addition it is sought how to work at the same time with issues like water, the environment or malnutrition, seeking to work the same issues with the families and at school. For the parents, the fact that their child attends school means more than a learning that will report positively to the community means a socio-economic social positioning and so be able to support ten or fifteen community members.