Entreculturas, 4th November 2011 -. Last August a Jesuit Refugee Service (JRS), ENTRECULTURAS field counterpart, team went to the Dollo Ado camps, in Ethiopia, where hundreds of Somali refugees arrive daily fleeing from the humanitarian crisis occurring in their country. Frido Pflueger SJ, director of the Jesuit Refugee Service East Africa, formed part of this team and he is still shocked by what he saw in them. 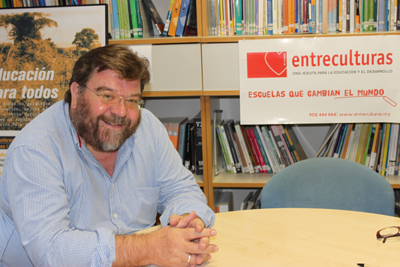 Question.-What had the biggest impact on you on arrival to the Dollo Ado camps?

Answer.-What impacted me the most, apart from the long queues of small children that could be seen around the camps under intense heat, was the transit camp. Now, this problem doesn't exist anymore, but during the first months of the draught, the people waiting to be transferred, had to sleep in a place with hardly any infrastructures, in really extreme conditions. Now the number of refugees had decreased: we have gone from thousands to hundreds of people daily, and therefore they are sent immediately to the camps without having to stay in the transit zones.

Q.-In your opinion, what are the causes of this humanitarian crisis without precedent? Can a culprit be identified?

A.-There are three main causes. First, the draught. This year it has been very hard as four rain periods that didn't happen coincided. Second, the war that's destroying Somalia. The Islamic groups often don't permit the entry to humanitarian aid. Last, the high price of foodstuff, even an African with a normal salary can't afford it. Why does this happens? Some say that it is used as a political instrument. Others say that is due to global market speculation, that affects impoverished countries especially, others still that is due to the price of oil which is very much related to that of food...

It is a homemade famine, because there is a draught every two years and this is known to happen, but nothing is done. The external aid arrives and the lesson is not learned. Governments that give aid should insist in the necessity for the receiving country to prepare for the next crisis as once the aid is given, they forget. In this region only 10% of the land that can be irrigated artificially is irrigated, because the government is not interested in helping the people, the worry right now is the next elections. With a government taking charge of the situation we could partly solve this crisis.

Q.-JRS has plans to work with ARRA (Government Organization for the Administration of Refugees and Returned persons Affairs) on a secondary education program: How and when is it going to start?

A.-With ARRA and the government together, we saw that to work on secondary education in the camps was best, but the problem is that to this day we don't know what the demand reach is for this educational level. For the time being, we believe that we can dedicate ourselves to class preparation, to some English classes and to work with ARRA the rapid education initiatives: some youths of between 16 and 18 years have never seen a school. We can't sit them down next to a small child, that's why we have thought about ding intensive courses, of two years in one, to place them at a basic level.

Q.-JRS is trying to implement a psycho-social support program; can you explain to us how it works and its importance?

A.-In such extreme contexts, children need to somehow return to normality and regain an affectionate environment. Because of this, to start with, we are going to build a multi-use centre that works both, as a learning and practice space for new disciplines (music, theatre, dance), and as a place to play that permits them to distract themselves from their situation. These spaces will also help us to learn the needs of the people that we are attending to. We will, as well, form local councillors to accompany and advise them. We want to commit the whole community to these type of activities.