María Calderón, director for  the JRS  Child Rehabilitation Project  in the D.R. Congo, warned that the victims of these situations are many more than those taking active part in the armed conflict: boys transporting munitions, girls used as sexual slaves, cooks or preparing drugs for the fighters, are some of the examples where children, although not forced to pull the trigger, are equally forced t accompany the violent groups.

“We consider them all child soldiers" says Calderón, who works in this project supported by Entreculturas since  2005  in the Congolese region  Uvira. But this country is not the only place where the children suffer these situations. We also work with the JRS in Colombia to support child reinsertion from the guerrilla.

Because there are still 24 countries with this drama of child soldiers, Alboan, Amnistía Internacional, Entreculturas, Fundación el Compromiso, Save the Children and the Jesuit Refugee Service  demand the States that have not yet done so, to ratify the Optional Protocol to the Convention on the Rights of the Child on the involvement of children in armed conflict. It is the most important legal  tool to help children in armed conflict.

The protocol is an essential tool to ensure that children are not used in armed conflicts. The  minimum age of direct participation in hostilities goes up to 18 in comparison to the former limit of 15 set in the Children's rights convention. It also forces the States to implement strict dispositions where this is not complied.

At present, the protocol has been ratified by 134 countries, 23 have signed it but not ratified it  (such as  Cameroon, Ghana, Liberia, Pakistan or Somalia) and a total of  35 have neither signed it nor accepted to do so (such as  Equatorial  Guinea, Ethiopia, Malaysia, Myanmar, Saudi Arabia or  o Zimbabwe). Spain ratified it in  2002.

With this initiative, the organizations join the United Nations Campaign " Zero under 18” that seeks universal ratification of the Protocol by February 12, 2012, on its 10th Anniversary.  The campaign aims that no one under 18 be recruited or used by armed groups since this prevents them from their childhood rights and has a devastating  physical and psychological impact on them.

Finally, the organizations ask the countries that have signed and ratified the protocol for additional efforts for its implementation, providing adequate resources. In  Chad, children between 13 and 17 are being recruited and used in combats and children under 10 are being used as messengers and transport agents. This means a clear incompliance of the international obligations of the country.

It is impossible to know exactly the number of child soldiers. There are tens of thousands around the world. According to the last report of the International Coalition in 2008, at least 24 countries recruited children under 18.

Since then, thousands of child soldiers have been freed after peace agreements and demobilization and reinsertion programmes in Afghanistan, Burundi, Ivory Coast, Liberia, Democratic Republic of Congo, South Sudan and other countries. However, during these years, conflicts have been intensified in  countries such as Chad, Iraq, Central Africa Republic, Somalia and Sudan (Darfur), where child recruitment has increased.

Child soldiers have suffered limit situations as some have witnessed the assassination of their parents or have been used to commit atrocities. Many have been victims of ill treatment, rapes and other sexual situations such as "marriages" with fighters. They have been drugged on many occasions to overcome fear, used as shields, forced to loot, rape or mutilations.

Reflection in the JRS schools in Colombia

“War is a problem which concerns us. Don´t cry for a world that fights, fight for a world that cries." With this slogan, students reflected on the reality of child soldiers in the JRS schools in Colombia, where many children suffer this.

Students made a national call to say "Stop, no more children at war. We believe in a better world, a world with no wars a world with many good people but where bombs are  heard louder, this is why we want to hear the good people, more than any bomb". 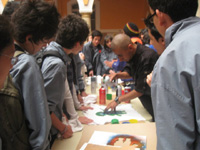 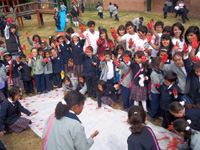