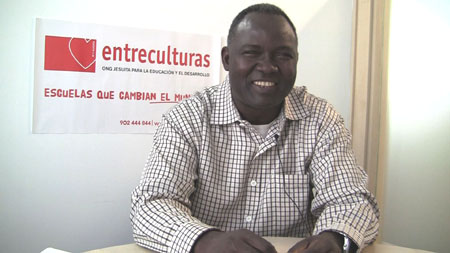 The CEFOD is a platform of critical reflexion, of dialog and posture interchange beyond the ethnic, political and religious divisions that could appear in Chad. The purpose of this institution is to promote education and training, and citizen participation in creating a peaceful, democratic and developed society.

How is Chad right now, after the electoral process? How was CEFOD’s work concerning this issue?

Chad’s reality is very variable. In 2007, the European Union and the Chadian government agreed to organize the first elections open to different political parties. In January and April of that year, parliamentary and presidential elections were held. In the first ones there was  an extraordinary participation of a good number of parties, so we had more to choose from. In the presidential, instead, the opposition party wasn’t strong enough and, in the last minute, President Idriss Deby was re-elected to prolong his mandate for the next 5 years.

The Chadian people expected a change. But it seems that changes don’t happen. People don’t trust Devy to carry out a political program capable to manage the countries problems….unless parliament pressures him to do it.

Regarding CEFOD, we published, before the elections, in each of “Chad et Culture” newsletters an article related to the polls and to the need for people to come to the booths and vote. We explained who the candidates were and their programs. That is, we prepared the people for the elections.

And afterwards, once the results were public, we also published various reflexions about how to interpret what had happened, which were the positive aspects and which ones the negative ones and, above all, which were the challenges we had to work on in the next few years. This has been our contribution. Now we are doing something similar looking at the local elections, with experts conferences at which opinions and worries can be shared.

We, from CEFOD, with our activities and publications, try to promote critical thinking to make people think, to enable people to make their own decisions and to demonstrate to them the importance of exercising their right to vote so as to change things and prevent the governing of the country by the military and/or rebels.

How does Sudan’s reality, and more recently, the Arab countries uprisings, impact the increase in the number of refugees arriving to Chad?

The situation in these two countries influences daily and very directly the future in Chad. A referendum has taken place recently in the south of Sudan that has resulted in the territory’s independence after decades of conflict and confrontation with the north of the country. However, the Chad government hasn’t recognized officially this result because it is afraid…there are many similarities between the south of Sudan and the south of Chad…there are Christians in both, there is oil and both have suffered the onslaught of war. And so it is thought that the south Chadians will see themselves reflected in and inspired by the south Sudanese to obtain their independence. Time will tell…we’ll have to see now, if South Sudan remains truly independent and prosper or the state of instability with respect to the north persists.

With respect to Darfur, in Sudan’s west, it seems that the people are demanding that the same referendum is carried out. Actually, more than 15.000 Sudanese coming from Darfur are hosted as refugees in Chad and waiting to see what happens…they remain in our country because although the war situation in Darfur has calmed down, they are not sure if it is not too early to return.
The Arab countries revolution is another matter. At the time, many Chadians crossed the border and migrated to Libya looking for a future…but now, given the situation, thousands of these people are returning and nobody is looking after them or managing what this means to the country (an estimated 25.000 people have arrived in Chad coming from Libya). Also, the Libyan rebels claim that the Idriss Deby government is supporting Gadafi, and so the relations between Sudan and Chad depend on the changes that may take place.

Inevitably, we are affected -for better or worse- by our neighbouring countries. Lets hope that education helps us get everything together into a safe harbour…