Amaya Valcárcel: “It is necessary a new settlement for refugees in Tunez” 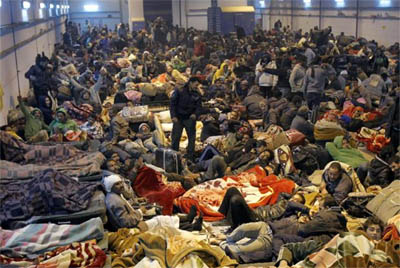 During the crisis in Libya that started on February 2011, many refugees and asylum applicants went to Tunis running away from Libya in consequence of the violence and instability in the country. Mainly, they are people from Somalia, Eritrea, Iraq, Sudan and Ethiopia, some countries where Entreculturas is cooperating several years ago.

Tunis has not the condition to give these people a permanent protection, but a temporal protection. Due to the "Arab Spring", the country is living a deep political and social change and it is necessary to reduce the problems of this country and to find a quick solution for these people. As response to the movement on a large scale to Tunis and Egypt due to the violence in Libya, ACNUR asked for a new international settlement for this population because they cannot return to their country of origin or stay in Tunis or Egypt. The UE response has been timid for the moment.

"The refugees in Shousha are desperate", explained Amaya Valcárcel. "Each time more people are returning to Libya in spite of risking for their own life and with the objective of going to Europe in a dangerous trip".

During her visit, Amaya spoke with Musse, a young person who run away from Sudan to Libya due to the obligatory recruitment military in Eritrea. "When we arrived at Shousha we were thinking about returning to Libya. But Libya was not an option. The African people from Sub-Sahara are being arrested and tortured", explained Musse. Amnesty International informs about 60 camps of arrest in Libya, six of these camps are controlled by the Government while the rest are controlled by illegal armed militias. Many of these militias accused Sub-Sahara people of being loyal to Gadafi. "Here life is so hard and I do not think that the situation is going to change without Gasdafi", explains Musse.

For years, the European Union, particularly Italy, has collaborated with Libya to stop the flow of migrants and refugees who were coming to Europe. We do not have numbers of the innumerable persons who have been obliged to stay in a country without protection for refugees or migration in these years, as it has been declared by the recent agreement of the European Court of Human Rights.

Libya is not the only country where the refugees are fear of returning. Many people have stories about previous movements, told us the Sister Mercy, a worker of Shousa. Return is not an option. Most people feel catch in Shousa and they wonder where can go".

Leila's case is emblematic. She was a child of 5 years old when she left her home in Chad with her mother. Her husband left Chad in 2002 because he was a member of an opposite group. She is pregnant. Leila's asylum request has been refused. They cannot stay in Shousa nor return to Chad. "We have news from Chad thanks to TV, she said.

"UE has the opportunity of showing to the World in earnest the protection of refugees and the help to their neighbouring countries", affirmed Amaya Valcárcel. "It is time to convert the values into actions, guaranteeing the protection for refugees in Europe, for those people who are left stranded in the border country".