The Justice Foundation - Bancaja award acknowledges the trajectory and constant dedication of those people or organizations that are noted by their contribution to the promotion and defence of human rights. The jury, presided by last years winners, the Charity Sisters, and formed by the presidents of the Justice and Bancaja Foundations, other year's winners, like Vicente Berenguer and the president of the Valencia Water Tribunal, representatives of public institutions, the Minister of Health, Social Policies, equality and the Councillor of Solidarity and Citizenship, has found a hard job in choosing one of the 15 candidates presented.

The winner this year, the Jesuit Refugee Service, has worked since 1980 to offer assistance to the forcibly displaced on a global scale. Its motto is "accompany, serve, and defend" and accordingly it offers care at all levels to this collective - health, education, religion, society -. The collective with whom it works comprises all that have been separated from their homes by conflicts, humanitarian disasters or human rights violations. Their activity is deployed in 50 countries in all continents and benefits more than 500.000 people. In it's more than 30 years of history it has been present in conflicts such as the civil wars in Centro America, in the Great Lakes in Africa and more recently in the Middle East, always defending the rights of the refugees, the imprisoned, conflict zones and border areas from a nearness and accompaniment perspective. 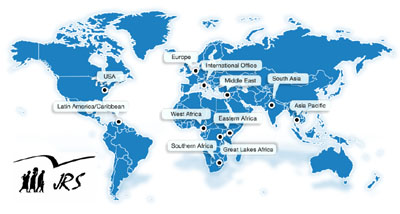 The award, with a cash prize of €18.000, was given for the first time in 1995 to Adolfo Suarez, and in successive editions has recognized the work of prominent persons and institutions such as the Vega de Valencia Water Tribunal, the Terrorism Victims Association, the Association Pro-Search of disappeared children in El Salvador, professor Muhammad Yunus, Ms Bogaletch Gebre, Father Vicente Berenguer, Dr. Pedro Cavadas and the Charity Missionaries.

The JRS has already decided to allocate the prize money of €18.000 to the refugees and displaced people in Ivory Coast and along the borders of this country with Liberia and Guinea. Keneth Gavin, JRS associate Director, was charged with receiving the reward in the award ceremony that took place in the Valencia Community.

We, from Entreculturas, thank the Justice Foundation - Bancaja for this award and give our more sincere congratulations to the Jesuit Refugee Service, an organization that, without doubt, deserves this recognition.

Kenneth Gavin: "this prize will serve to cast light upon one of the gravest problems facing humanity at the present moment: the refugees and the displaced persons"

The day before collecting the award, the Jesuit Refugee Service assistant Director asserted at a press conference that currently "we are facing the highest number of refugees in history", 15 million exiles and 27 million internally displaced people.

"These are very high figures and one can easily get lost but what must be realized is that behind this data there are people that have lost everything during years and years of exile ", he added.

Another one of the most important problems at the moment is, as he explained, that of the so called "urban refugees", that is, persons that live in suburbs of cities like Johannesburg, Nairobi, Pretoria or Kampala. According to Gavin, 60% of the refugees are "urban", a circumstance that makes helping them more difficult as attending these people in these suburbs proves very difficult.

"The UN has needed a long time to understand this challenge and to help meeting it, JRS has got together with them in Geneva several times to make proposals that would help in solving this situation", he remarked.

Gavin also pointed out that the north of Africa is today another of the world's "hot spots", due to the Arab conflicts that are provoking continuous migratory flows towards Europe.

Concerning this issue, he highlighted Rome's "serious concern" about the Tunisian and Libyan refugees arriving at the island of Lampedusa and indicated that they are not only working to cope with the massive arrival of immigrants, but also in promoting a sea rescue system.

Gavin also remarked on the honour it means for JRS to receive this award from the Justice Foundation and the Bancaja Foundation as "this prize will serve to cast light upon one of the gravest problems facing humanity at the current time".

"A very large amount of material help is needed but also it is necessary to look after the people and be able to tell them that God hasn't abandoned them", he explained.

The JRS is the result of a Basque priest's, the father Pedro Arrupe, being moved by the China sea refugees and the subsequent decision in 1980 to found an organization to help these collectives.