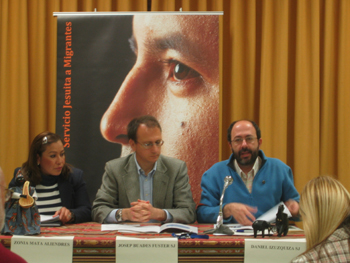 The presentation of this document  was also  a call of attention or political leaders on  the starting day of the campaign. The JMS asked politicians no to use immigration as debate between different parties and that immigrants may not be used as the cause of all problems. To exclude immigrant people is to break Spanish society.

During the election campaign it is very tempting to use immigration to raise debate and gain dissenting votes. It is true that the regulation on rights and freedom of foreigners in Spain and their integration was passed by law, but debates can always rise such as the extension of free health care, the capacity of municipalities regarding permit renewal issues etc.

The Jesuit Migrant Service Spain, is a network of entities dedicated to the study of migrations, their welcome and formation, the promotion of an inclusive and intercultural society. It is made up of the University  Institute of Migration Studies (Universidad Pontificia Comillas, Madrid),the Migra Studium Foundation (Barcelona), the  CeiMigra  Foundation(Valencia), the San Juan del Castillo Foundation  (Madrid), the  Ignacio Ellacuría social Foundation (Bilbao) and the Claver Volunteer Association (Sevilla).  It works in coordination with the JMS Latin America-Caribbean and joins efforts with the Jesuit Refugee Service Europe to take part in Northern Africa where they work with migrant populations.