"More than 12 million people urgently need attention to survive the worst drought in decades. The human cost of this crisis is catastrophic". Thus sounded the alarm send out a few days ago by the United Nations Organization (UN) secretary General, Ban-ki-Moon in the face of the terrible emergency situation that the region is actually suffering.

And it's a fact that this region has been suffering an unrelenting drought for the past two years that many have estimated to be the worst since 1951. The countries worst affected by its devastating consequences are, for now, Somalia, Kenya, Djibouti and Ethiopia. Within their borders, their inhabitants are suffering levels of malnutrition, especially in Somalia, up to six times what the UN considers already an emergency. In fact, as of today more than 500 Somalis have lost their lives due to illnesses related to malnutrition in the last months. 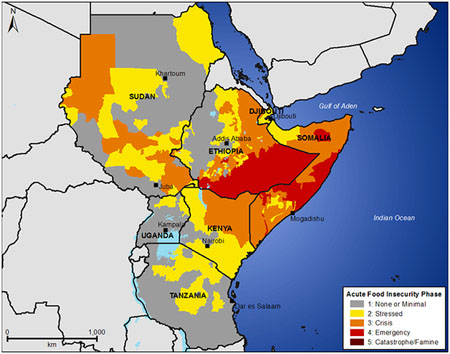 In view of this alarming situation, the UN secretary General made an appeal to the international community and urged the member States to support the call for US$ 1.600 million made by the different UN agencies. To date, only half this figure has been received.

An unending number of refugees...

With this terrifying perspective, thousands of families are fleeing their homes in search of some hope. As a result the number of refugees, mainly from Somalia, doesn't cease to grow. The UN High Commission for Refugees (UNHCR) has warned on this issue that "the efforts to provide aid the Somalia refugees that arrive, day after day, to the neighbouring countries, risk not being enough without a more rapid and solid international response to this crisis caused by the drought and the displacements in East Africa"; and has launched an emergency appeal for US$ 136.3 to prevent a humanitarian catastrophe in the region.
Meanwhile, the refugee camps continue to take in new people arriving daily in appalling conditions of malnutrition. The majority of them have surpassed their intended capacity months ago. One of the most important is Dabaab (sited in Kenya and one of the largest in the world), it receives about 2.000 new people each day. Built for 90.000 it currently hosts more than 380.000 dwellers. 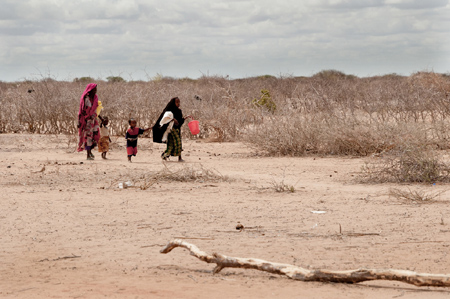 Photo: Somalia / Save the Children

The Jesuit Refugee Service (JRS) currently has up to 13 projects active in Ethiopia, Kenya, Sudan and Uganda, looking after up to 105.000 refugees, internally displaced people and returnees of the more than 9 million that are thought to be in the entire region (including Somalia). JRS- East Africa, offers education, psychosocial support, education for peace, subsistence services and emergency aid and is involved in protecting human rights and advocacy activities at different levels..

It seems clear that in the face of this overwhelming reality Somalia is going through, the numbers will keep on rising weekly, making urgent the reinforcement of the attention and attendance that JRS realizes with Entreculturas support.

A long trajectory in Africa

The JRS has been working in Africa for more than three decades. One of its first engagements, back in the 80's, was in Ethiopia, providing foodstuff, shelter and medical aid to thousands of displaced people, from the country itself, due to the war and the famine. Only a few years later, in the early 90's, the JRS-East Africa region was created with its headquarters in Nairobi, Kenya.

Two years later one of JRS's largest and longest projects started in Adjumani, northern Uganda, designed to help the Sudanese refugees through education and pastoral care. A project that culminated in 2008, after the delivery to the government of the 75 schools created and the repatriation of the majority of the refugees to Southern Sudan, which are helping rebuild their country with the formation they acquired during their exile in Adjumani.

For more information a donate: www.jrs.net