Attitudes, values and  systemic racism set, in an open or veiled way, a hierarchical order between ethnic or racial groups , frequently used to justify the privileges or advantages enjoyed by the dominant group. Therefore, racism constitutes  a violation Human Rights and Dignity, however, it is a situation that has existed for a long time and something that even today millions of people have to face.

The United Nations with its aim to renew their commitment of work against racism, celebrate each March 21st the International Day for the Elimination of Racial Discrimination. The reason of choosing this date was that on that day, in 1960, police opened fire and killed 69 people at a peaceful demonstration in Sharpeville, South Africa, against the apartheid "pass laws".

On  this day the United Nations aims to remind us of its duty to fight  and eradicate racism, racial discrimination, xenophobia and all kind of intolerance that take place all over the world. On the other hand the United Nations and the International Community  have established international mechanisms  to help eradicate racism, such as the International Convention on the Elimination of All Forms of Racial Discrimination (1965)

Constitutional and legal regulations have been created by nations as well as by individuals  with a view to eradicating racism in their own countries. Regrettably, the world has not become aware of what has happened untill now and there are still people who believe in the existence of a superior race. Although  apartheid was eradicated recently  in South Africa, nowadays racism and discrimination exist in many different parts of the world. In Spain, for example, after years of discrimination against gipsy people, racism now focuses mainly on the immigrant population.

Factors that have a special effect on racial discrimination

Racism, xenophobia or classism are examples of discriminatory practices. Discriminatory practices are attitudes of contempt, offence, rejection, exclusion and segregation that some persons feel about others based on prejudices. We can find the causes that explain those attitudes of rejection in the fear of accepting the differences related to gender, ethnics, religion, politics, ideology or culture between people. People who discriminate  do it because of ignorance, as human beings tend to reject everything they do not know, and this consequently causes them fear. People who discriminate are scared of  difference as they consider it as a threat.  Intolerance against difference is a consequence of discriminatory attitudes and generate ill-treatment, and physical and emotional abuses against the others, which represents a transgression of human dignity and fundamental rights.

Racism is a feeling we learn, nobody is born being a racist. Racial discriminations concern all of us and it is in our hands to put an end to it.

In Entreculturas we believe that education is an essential tool to bring the many different realities and cultural displays closer to the society, it means that through Education it is possible to connect cultures in order to know and respect each other instead of rejecting them.

In Entreculturas we see diversity as an opportunity and not a threat, and that is the reason why respect and interest in "difference" are part of our "modus operandi".

Ecuador has nowadays a population of almost 14 million inhabitants, 52% of which are indigenous, one of the highest rates of indigenous populations in all Latin America. Despite of being a majority, customs and cultural characteristics of this part of the society increasingly tend to be relegated in the face of dominant practices of mestizo and whites. Also in Ecuador, there is a black minority, descendants of Slaves brought from Africa some time ago to work in the farms, that are also discriminated against. 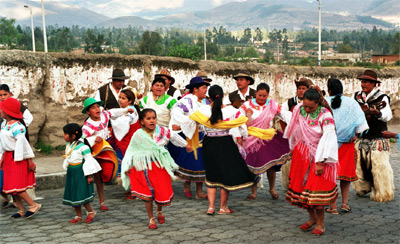 Given that situation of cultural inequality, economical differences and  general impoverishment of the country,  our local partner Fe y Alegría Ecuador,  is developing an important work in favor of approach and dialogue between cultures, promoting the mutual knowledge and respect. In order to achieve it, this project promotes educative programmes that aim, on one hand, that each culture (mainly the indigenous one) recover  their roots and pass them on from parents to children in order  to not dilute and on the other hand, that there is a real coexistence, peaceful and constructive between all students, regardless of the social framework they belong to .

José Parco, Fe y Alegría Intercultural Project coordinator in Chimborazo region (Ecuador), explains to us that the main goal of this initiative is "to recover the Andeans knowledge inside the communities to use them in their daily lives and try to make  possible that communities can understand, meet and  respect each other, without loosing their own identity and without excluding themselves from the global world". In this sense, we should remark that the kind of inteculturality they want to reach with this project is bidirectional, it means, it goes not only between indigenous people or from indigenous people to the white people, but also  the other way round.

"We have created an intercultural working net in which fathers, mothers, boys, girls, educators and technicians of the Project are involved", he explains. "At school we try that didactic materials promote bilingualism, it means, they are written in Spanish and Quechua and that also the contents include cultural characteristics of all communities, indigenous and mestizo".

As José Parco explains, grandparents in the communities have played a very important role as they were, with the assistance of  parents, the ones telling the children about traditions and costumes. "Children take notes and adults check them afterwards. And from those notes we have elaborated the school material in order to put into practice the cultural exchange".

The second part of the Project, once a certain degree of training in all community members is reached, consists of an intercultural party called "fiesta del sol", that aims to  convey their own culture to the other communities. In this party are also involved the schools trough many different activities as dancing, writing and reading, painting and drawing exhibitions. Also the mass media was called in order to make  the intercultural exchange process reach a bigger public. 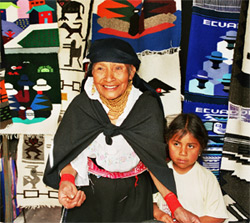 "During this project we came across several challenges", José Parco admits. "In the beginning, in fact, we found some rejection in the communities to make themselves known and also some lack of interest by the non-indigenous people. On the other hand, interculturality should be promoted as an interdisciplinary subject, it means it should cover all  aspects of a person's life during the day. In this sense, for instance, we came across necessity to train teachers in bilingualism, or with the urgency of training cooks in Andean traditional dishes at the school canteens ... "

In principle, results have been really good, but more resources are necessary. "We lack financing and political aid,  teachers (that, also, are being badly paid for his work) and it is still necessary a positive mindset towards  indigenous issues from the rest of the population", says José Parc in a thoughtful way.

Entreculturas works to make possible each of the necessary steps to turn schools into  a real driving force of development within the communities. Our support of intercultural education is showed in all the projects we support, both in the North and the South, as we are totally convinced that diversity, far from been negative,  enriches the formal and informal development process of people.