A fragment of my life in Haiti, by Olga Regueira, Entreculturas volunteer

"Haiti is a small country, full, very full of its people (in my opinion "overpopulated"). It is situated in a little corner of the world, next to its neighbouring Dominican Republic, just a step across islands like Puerto Rico or Cuba and above all with the strong influence of the nearby and powerful Miami. 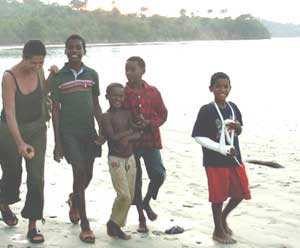 Upon arrival, one is surprised by many things just as when you arrive in many other countries...Chaotic traffic, dirt, decadent buildings and roads that before they are finished, are already deteriorated. The poverty, the public-private transportation that is almost non existent, the shameful human conditions of its past and recent history. The extreme conditions of the most populated urban areas, the poorest. The urgent need to cover the deserted rural areas... Yellow eyes, swollen stomachs, open wounds unable to heal, rags instead of shirts or trousers. Intense heat during the day whilst at the same time, feeling the coldness of being abandoned by their own people.

It is not different from many other places in Latin America or Africa. This mixture, this combination of both continents makes it a very interesting place and maybe this diversity is part of its richness. How far from that land, Africa, and how near its origins, how much pride and will not to loose that identity. They fight for it through the way they dress, their hairstyles, their colours, songs, their handicrafts, their way of talking... but no, dear friends, we are in the Caribbean! And they are warm, happy and with an easy smile. They like enjoying life, whenever they can, enjoy the light of the sun that melts, that dries. Enjoy the rain, that rain which falls and kills. The same rain that on many occasions is the only means to wash oneself. They enjoy the nakedness of a little boy who runs looking for his mother or grandmother and they laugh... they laugh because crying will not bring them what they need.

They are hard and they do not trust. They live under the claw of speculation, mafias, easy money and the "foreign" economic and military control. They are strong and powerful minorities, but minorities and where don't they exist?

Yesterday, walking home after work, a cow chose to appear in my path. She appeared suddenly, without warning, on my right. She was a tall cow, not fat, with brown hair, almost red and walked with an admirable decision at that time of the day where the heat has taken over the will of the rest of the living. She had a rope around her neck but it was loose and her speed made one think she had escaped some prison and was running to find a shade. I saw her pass, not without some fear and than the magic started, or maybe it was too much sun above my head... The end of the rope started to lift until I saw a little pair of hands fighting not to loose the rope. The little hands belonged to the responsible for the cow. He was no more than three years old, with very black hair. He had a ragged but shiny yellow shirt and the short- cut trousers could also fit his older brother or maybe his father. With an angry look, a tight mouth, digging his bare feet in the earth and using all his strength to pull the rope up from the ground... that is how he tried to impose his rhythm on the cow. Some day he will grow up and he will do it!